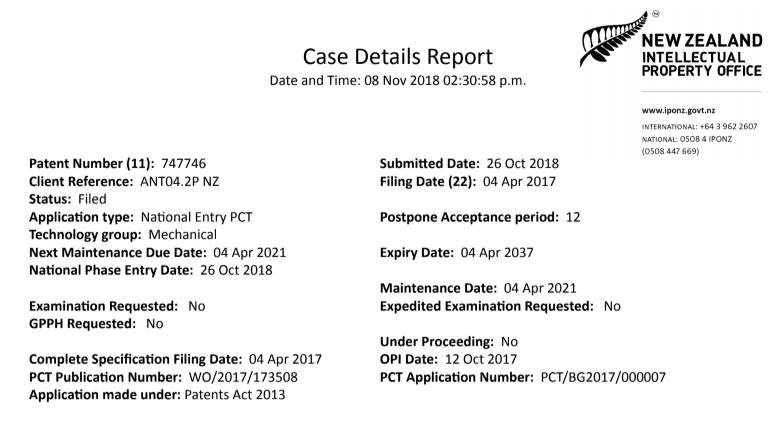 Great News, we entered the National Phase stage in every country we see as a potential market for Rutamb. This means that we submitted our patent application at the Intellectual Property bodies in every country we regard as a priority market, including (but not only) The Rugby Championship nations, the Six Nation countries, The United States and Canada.

If we obtain the patents, we shall have a monopoly over the technology for 20 years. Every Tackle Machine legally produced or sold will be made by us or by licensed manufacturers. And thus we shall set a brave new way tackles are practiced.

The Tackle Machine will provide school rugby teams with the opportunity to learn proper tackling skills without the risk of injuries. The sensors placed around the machine, on and in the dummy will provide data which will be analyzed by artificial intelligence and by any willing client in order to determine the best approaches against the next game’s opposition. It will help coaches to see which players are best prepared and track the progress of each of them in the long term.

The Tackle Machine will be available in different versions – basic, junior’s, and professional which will include any element of the Internet of things. For the parents of little players there will be special, home version which will suit perfectly in a standard backyard.

The journey is just starting. If you wish to join us or follow us, you are very welcome. We are open for partnerships and pre-orders. Just get in touch with us for a discussion. 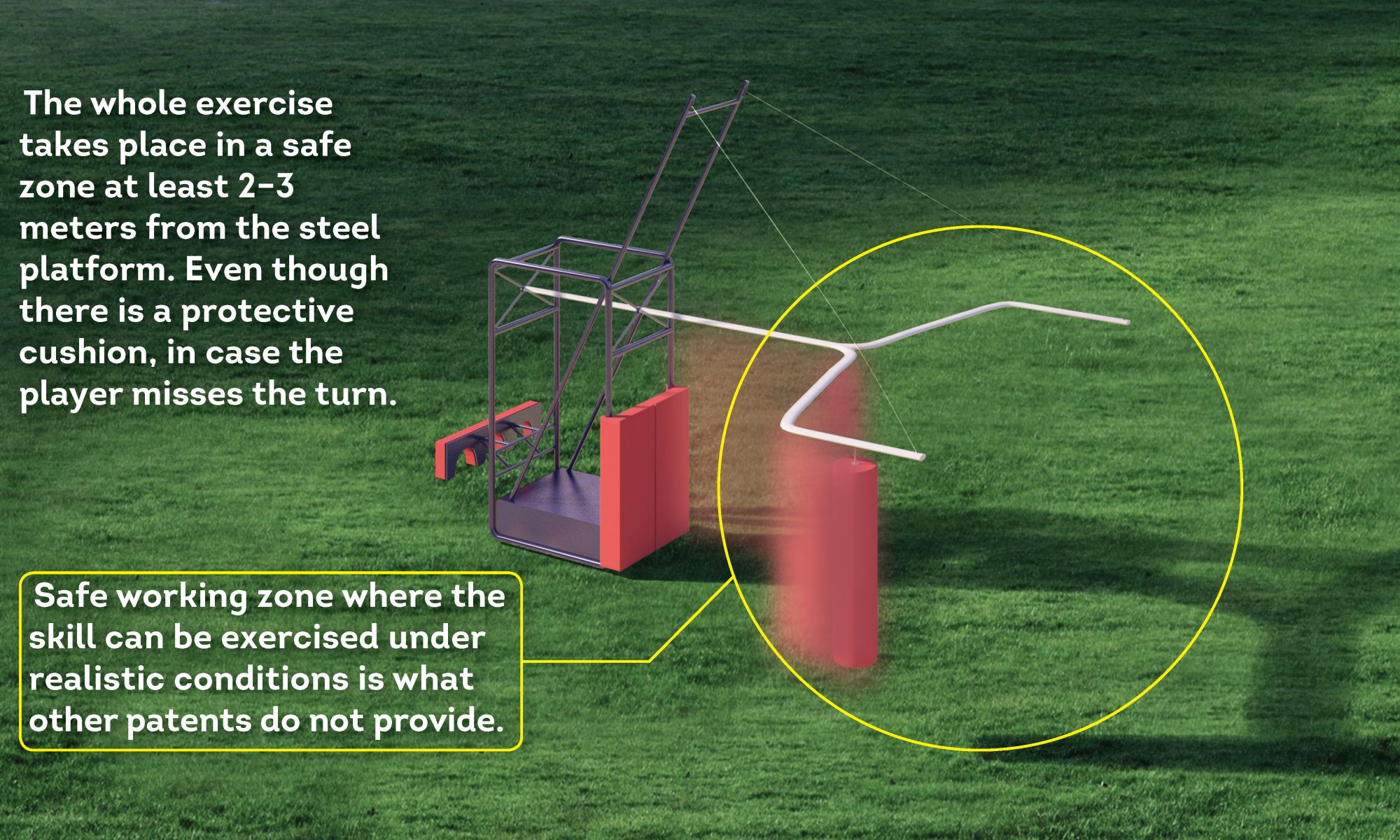 Statistics is clear – one of every eight children who play rugby is likely to get injured in the process of games and practices. And the most sensitive phase which is most associated with injuries are the tackles and collisions. The dilemma how to make rugby safer occupies the minds of pretty much whole members of the rugby society – parents, coaches, managers, doctors and policy makers.

To this we try to respond with a new training apparatus that helps the kids learn to make proper tackles in safe and realistic environment.

The Rugby Tackle Machine – Rutamb simulates the motion of a side stepping ball carrier. It moves the tackle bag straight for two and a half meters. After that it makes a 90 degrees turn to the left or right and after two meters with another 90 degrees turn it heads forward again. Once the Tackle Machine’s development is completed, the process will happen with realistic speed set according to the personal characteristic of every different child.

The left or right turn of the tackle bag will be determined by the coach or randomly selected by the mobile application for using the machine. The dummy itself will be made of foam and therefore will be extremely light. This will contribute to the high speed of the dummy and will make it harmless to the kids.

What this means is that soon kids will have a mean to practice tackles not one against another (it is not up to us to say whether the old exercises should be excluded) but against a movable dummy. This will help children gain experience much faster than in the recent circumstances. Gaining experience to tackle against a movable dummy means the children will be better prepared for full scale collisions. This must reduce the injury rate significantly and help grass root rugby become even more attractive. 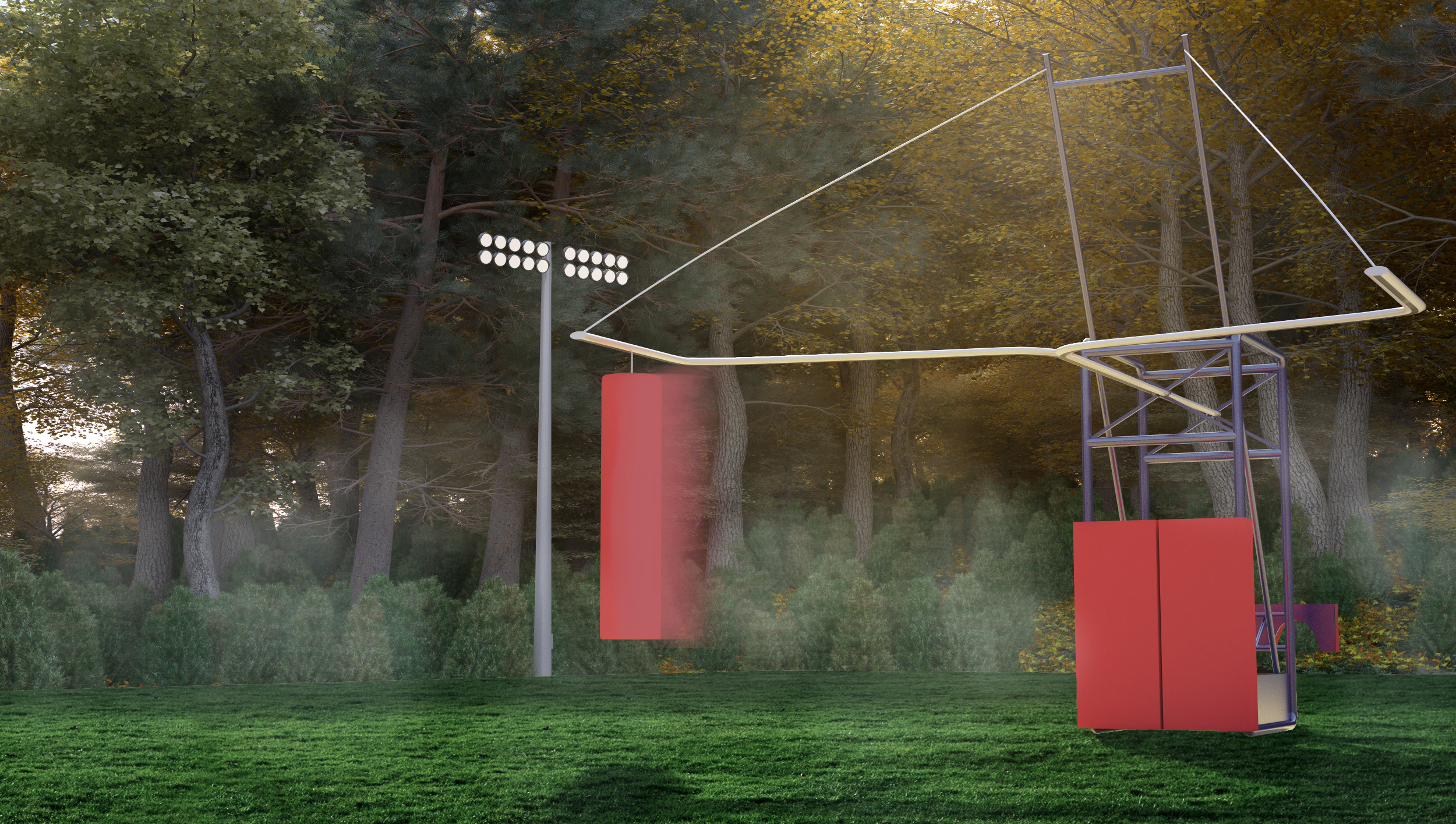 The Tackling Machine aims to help the players improve their intercepting skills whether they deal with side-steppers or just faster chargers.

The machine comprises a supporting frame structure, a fork-shaped tubular element inside of which there is an electric guide. A dummy is attached to the drive and follows its trajectory which simulates the motion of attacking rugby or football player.


The fork determines the direction of the drive. It starts straight and then turns left or right imitating a side stepping maneuver aiming to evade the defending player.

In order to be sustainable and light, the fork is made of carbon fibers. It is secured also by having its ends connected with the platform by turnbuckles.

The dummy is super light. It is made of foam and it is attached to the drive.

The aim of the defender is not to practice the collision but to intercept the charger.

The drive moves with the speed of the practicing defender. It means the speed can vary from very slow to 35 KM/PH. When the machine is completed a mobile application will help the coach set the proper exercise according to the personal characteristics of every single player.

Once the dummy is hit or caught, it gets detached from the drive.

Since the dummy is very light the machine is perfect for helping children learn to make tackles.

It will be suitable both for teams and individual users which can place it in their backyard. 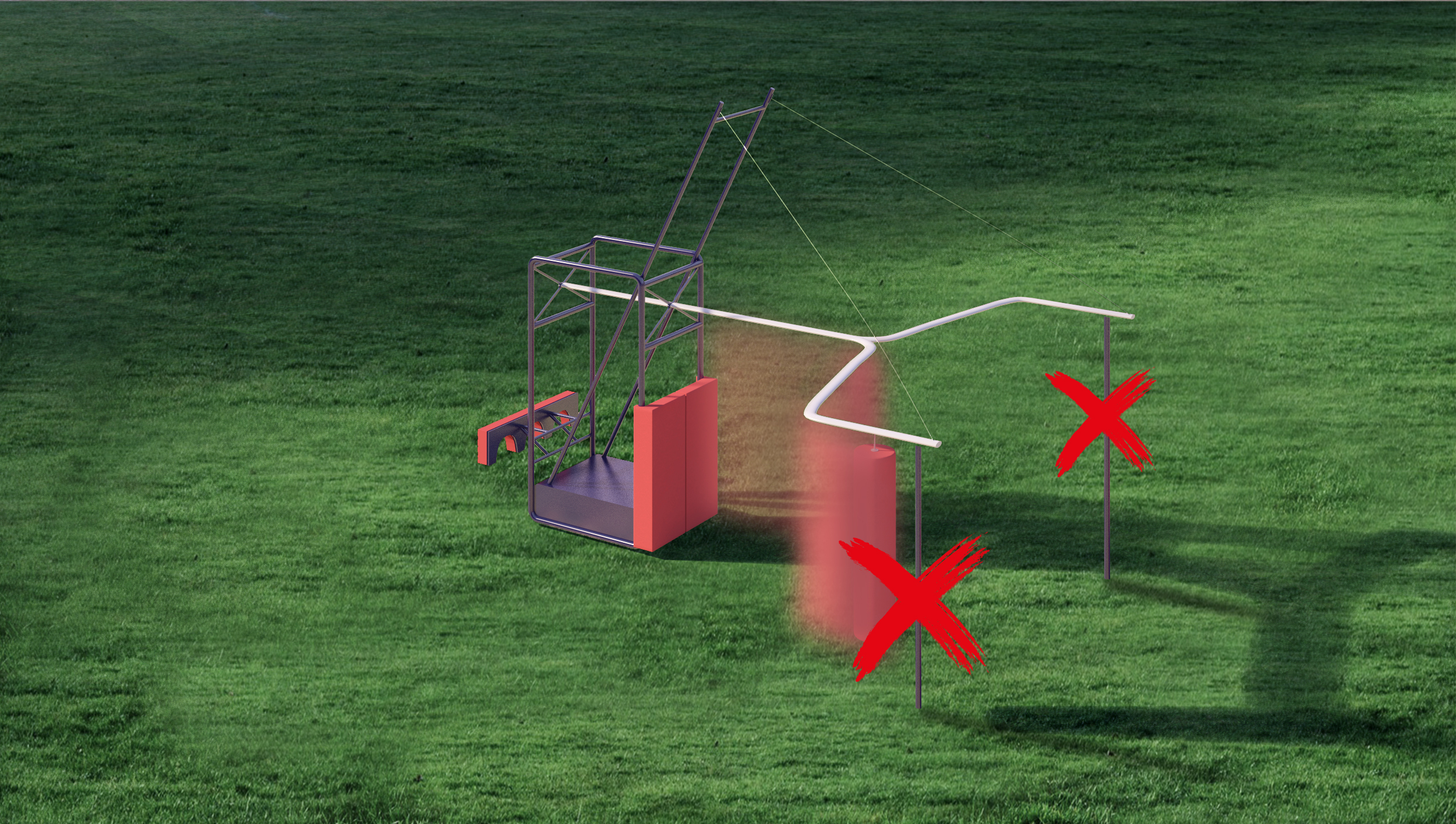 We have all seen how dense the modern rugby is with missed tackles. Yet, we still don’t have a training apparatus that helps the players improve their tackling skills. All exercises and methods developed so far provide either realism or safety. This means that if the coaches want to reduce the risk all exercises they pick will bear a big dose of artificialness while the realistic ones usually involve at least two people. And when they combine the tackling attempts with the side steps and hand offs for many times, the risk of injury becomes significant.

But why after so many years of sports innovations the most we have developed so far are the tackle bags? The truth is that tackling machines have occupied the minds of inventors for more than 80 years and there are more than ten patents in that area. The bad news is that while they are innovative and industrially applicable they all suffer some vice that prevents them from market success.

The pictures below show some of the patents in that area. All of them have in common one of the two things: they either project a straight trajectory for the dummy or have propping pillars to balance the weight of the dummy at its final point. What this means is that we have to choose again between the safety and realism. At least until now. 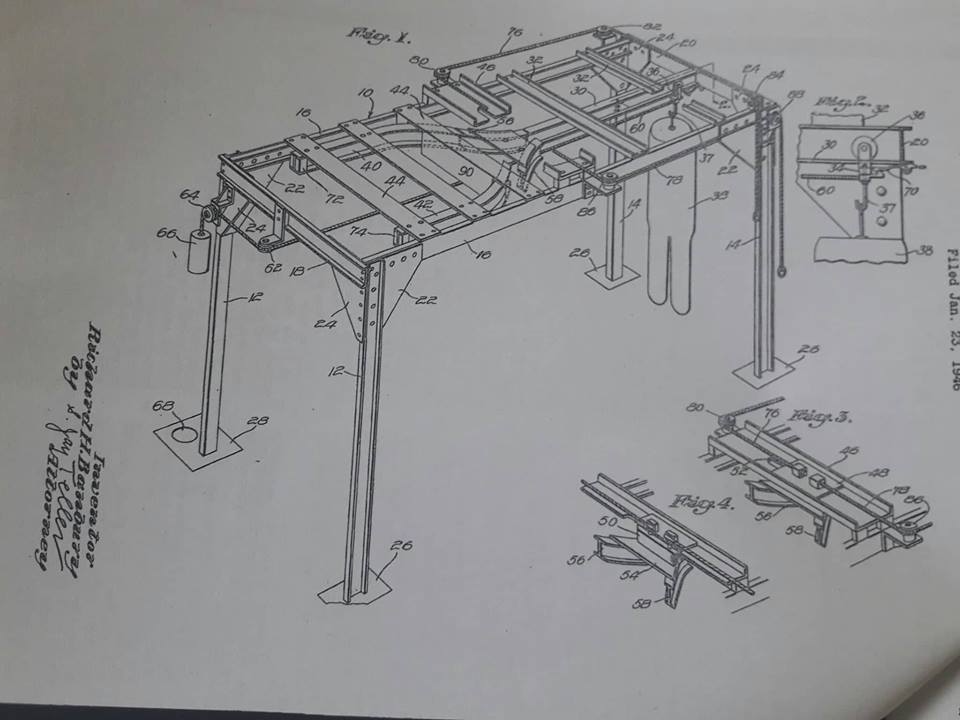 Our Tackling machine goes further than any attempt before and combines S-shaped trajectory of the dummy that imitates the side steps with realistic speed and safety for the defenders.

How we achieve that?

We set the fork-shaped tubular element which determines the trajectory of the dummy outside of the support frame structure and balance the weight at the end of the branches using turnbuckles instead of pillars. This way we create a safe working zone for the practicing players. They can tackle the dummy with full speed and strength without the concern of crashing into a pillar or another person. The dummy itself is super light, made of foam and can’t cause any harm either.

To make a super light dummy proved to be a good Idea because of these reasons:

1 The aim of the exercise is to intercept the opponent not to smash him or her although it is possible too.
2 By reducing the weight of the dummy we made possible to raise its speed up to 35 or even 40 kilometers per hour which brings extreme realism compared to the maneuvers of the fastest rugby players in the world.

3 Having a light dummy means we need a lighter platform too. It is not fixed to a particular place on the field or in the gym. Instead it can be moved by small number of players anywhere which means it will not harm the grass and does not require artificial turf.

4 It is easy to assemble and disassemble? It can also be installed on a scrum machine or it can even be upgraded with the elements that allow it to serve as a scrum machine in addition to its main utility.

5 The shuttle inside the fork shaped tubular element can easily return to starting position and be reloaded with another dummy if the previous tackling attempt has been successful. It means fast charging and many iterations of the exercise in short periods of time.
6 The tackling machine is safe to be used by children and teenagers.

7 It can be purchased by individual users and placed in their backyards.

All these factors make allow our Tackling machine to bring the tackling practices to unseen before combination of safety and realism.

Yes, there is the Dartmouth’s MVP but we regard our product not as a competition to the EMVP but as something that provides a different utility. Therefore, it can be matched with the MVP for the full range of exercises. Besides, there are many differences which in some aspects are in our favor and they can easily be noticed by reading the 7 points above.

Nevertheless, our price will be significantly lower.